The fight to make Mendocino County organic and non-toxic has been long. We can only hope that it will come to an end soon.

The following articles have been researched and found by Robin Sunbeam and others and I have compiled them below. The oldest is at the bottom and the newest is at the top. I apologize for the text being a little difficult to read in some of these articles. They are OCR from old newspapers and some letters and words are garbled.

Plans to cut the use of herbicides by both Caltrans and the City of Ukiah are to be brought back to the City Council for its consideration.

Caltrans District 1 Director Rick Knapp spoke at Wednesday’s Ukiah City Council meeting about its vegetation control program and asked the council to let Caltrans continue to spray along the 1.8 miles of Highway 101 that runs through the city limits.

“Our vegetation management program’s emphasis is on safety,” said Knapp, adding the agency is working to reduce the use of herbicides by 80 percent over the next 15 years.

Council members said they thought it would be hypocritical for the city to ask Cal- trans to quit spraying if city departments continued to use herbicides.

Councilman Jim Mastin said “one of the problems he sees is we (the city) don’t have a program to reduce our use.”

“It is easier to tell them (Caltrans) to stop,” he said, “then to force ourselves to stop.”

Councilwoman Kristy Kelly said the city needs to respond to local opposition to spraying and “show our intent to move toward zero usage.”

Public Works Director Rick Kennedy said the city uses five gallons of concentrated Roundup a year, and it only does spot spraying except for one area at the airport which is hard to mow.

It’s not sprayed everywhere in the city,” Kennedy said. “We spray areas only once a year,” but he said the one employee who does the spraying does it when he has time and there isn’t a regular schedule.

Over the last six years, said City Manager Candace Horsley, Ukiah has worked to reduce its use of herbicides to five gallons.

The county says it uses about two gallons of concentrated Roundup a year. And Knapp said Caltrans uses two-tenths of one percent of all pesticides applied in Mendocino County on a yearly basis.

“Any reduction of herbicide uses by the county, city or Cal-trans,” said Knapp, “won’t affect the health risk to people” because the majority of pesticide use isn’t by governmental agencies.

Local attorney Barry Vogel supported this viewpoint saying “to deny citizens the right to be free from exposure to toxins on public property is very different than private property owners using them.”

Vogel characterized Caltrans’ effort to reduce herbicide use by 80 percent as “let’s be less bad and serve you less poison in your area.”

Mastin asked Knapp to put together a plan to use spot spraying along Highway 101 and mow or use other means to control most of the vegetation on the roadsides. The city staff was also direct- 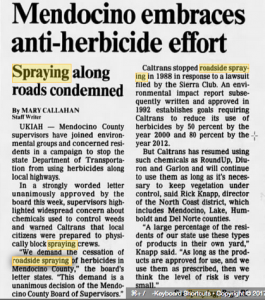 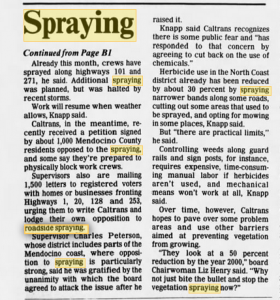 A coalition of groups opposed to Cal-trans roadside spraying is planning a march and rally Wednesday in Ukiah.

The lunchtime demonstration will begin at 11:30 a.m. when people from all over the county will gather at the Alex R. Thomas Jr. Plaza downtown, said Els Cooperrider, one of the organizers of the event, and then march up State Street to the Mendocino County Court House.

After the march, a rally will be held at the court house from noon until about 1 p.m., said Cooperrider. “We 1 thought if we had it during the noon hour,” she said, “people: might want to use lunch hour to attend.”

Gary Ball from the Mendocino Environmental Center, which is helping to put together the event, said the growing movement against Caltrans spraying has brought together anti-toxic groups and also individuals from the coast and the inland areas.

A Ukiah resident opposed to herbicide spraying, John McCowen, said one of his biggest concerns about Caltrans is the state agency ignores the will of the county’s elected representatives and the people who live here.

“They should be working for the people,” he said of Caltrans which is financed by tax dollars, “and not following their own agenda.”

Caltrans District 1 Director Rick Knapp has formed a Roadside Vegetation Control Advisory Committee and selected Cooperrider as one of its 14 members.

The committee met for the first time recently, and Cooperrider said the members voted to make the gatherings open to the public with a 20-minute public expression period at the end of each meeting.

“This shouldn’t be happening behind closed doors,” she said.

Although the group has no actual power, it recommends to Caltrans viable alternatives to control vegetation along the roadways other than using herbicides.

“We will make those recommendations known to the public,” said Cooperrider, “and the public will know if they are followed up on.”

Along with Cooperrider, who is from Ukiah, two other Mendocino County residents are on the Caltrans committee — Dr. Marc Lappe of Gualala, a member of one of the opposition groups, and Peter Chevalier of Ukiah, who works for a pesticide distribution company. 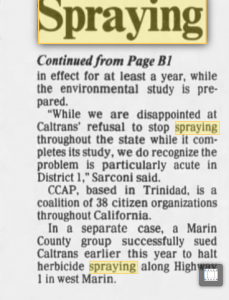 Petaluma Argus-Courier  July 20, 1988
Congratulations to artist Donna Sheehan of Marshall, who has been named Environmentalist of the Year by the Environmental Action Committee of West Marin!  Donna is a founder of Mow Our Weeds (MOW), a five-year old group that is dedicated to eradicating the use of herbicides by CalTrans to control the growth of roadside weeds along Highway One from Tam junction to Valley Ford in Marin County.

Members of MOW have spent untold hours researching the harmful effects of herbicides such as Round-Up on humans and animals, made signs saying No Spray: Mow Our Weeds, have blocked Caltrans sprayer trucks with their own bodies, and have even taken their fight to the courts – winning a temporary injunction in December from a Marin Superior Court Judge against Cal Trans because that agency had failed to comply with the California Environmental Quality Act in getting its herbicides approved for roadside spraying.

Thanks, Donna and the gang at MOW!

This article is unfortunately not available in the archives. We will try to add this later.

The herbicide question whose right* should prevail?

“We the people of Mendocino County. State of California do ordain as follows…” With this prosaic introduction, the registered voters of Mendocino County ore drawn into the text of what may very well be one of the most controversial and complicated initiatives introduced in thiB county On Tuesday, June 5. Mendocino County voters are being called to the polls to settle the question of whether the aerial application of phenoxy herbicides, including but not limited to 1,4,5-T. 2 ,4D Silvex or any matter containing the chemical dioxin. should be banned The substance of the question, some would have voters believe, is merely an either-or situation vole for poison or vote for profits The reality is that Stripped of media hyped sen sattonaltsm. the question almost reduces to one of rights-property rights, natural right* and constitutionally guaranteed rights Should timber companies, other corporations or perhaps even neighbors be able to spray material* containing alleged poisonous substances on their property even if that spray should drift onto some else’s land or Into someone »’• drinking water’ Should the recipient of the drift have a right to demand that the substance not be sprayed 4 To try to intelligently answer this question voters first should know or have some reasonable doubt that the substance being sprayed is poisonous to humans and animals They also should know in what amounts it is harmful And. the question of dnfl should be answered Unfortunately, no toot proof evidence as to long term effects of 2,4>T and Silvex are available Voters also must weigh the social and health factors involved m the possible long term risks of spraying if they do. indeed, exist, against the possible economic costs of alleged reduced production, and profits and subsequent increased unemployment To help voters m die momentous and time consuming chore r pt sifting through the mound* of information, both pro and con. The Journal has prepared the following report PHESfOSIES— tnUTIHRY %BE USD WHERE VSKO Phenoxy hertondes nave been » pari of forest prarttre* sauce (he fate 1940s, with their uae cocreasmg m recent also are mmt tm roadside tn aetfcVy rtgfct of ways, on ml uw .ttBopfcimls They In fact in 1975. 55 million pounds of 2.4D were dumped on food and feed crops in the United States Phenoxies control broadleaved weeds in wheat, barley, rice, oats, rye conr, grain sorghums and certain legumes In forests, phenoxies control the growth of hardwood trees (such as oak and madrone > and brush so connifers (such as redwood and fir > can achieve a more rapid growth This growth control is achieved by what some experts have said amounts to literally “growing a plant to death Additionally 2 ,4 D and other phenoxies have been used in canals, pnnds. lakes and waterways to kill floating weeds such as water hyacinth, submersed plants such as cattails and willows Industrial and city uses include control of brush on utility and Iran sportation rights of way, control of dandelions, plantains i tropical banana plants) weeds in lawns, poison ivy and other plants of public health tin pnrtance The he’s! known of the phenoxy herbicides are 2,4 D. which is 2,4 Dtchlorophennxyacettc acid. 2,4,5 T which is 2,4.5- Trichlorophenoxyacetic acid, ,2,4 >TP. or silver, which Is 2 12,4,5 Trichlorophenoxy > propionic arid it’onUnuedon P• «e t» OFF TilK SIIKI.F The Amchem 2. 4 5 IV also known as Stivev pictured above is no longer .available on the shell following the K|V\ temporary ban County voters will decide Tuesday whether to place a ban on aerial application of any phenoxy herbicides, those that contain dioxin